5010 is part of HIPAA and is an updated set of ANSI X12 Standards implemented by the US Department of Health and Human Services. It is for electronic exchanges of health related transactions between insurance carriers and provider and/or vendors such as billing services and clearinghouses. So if you are submitting any insurance claims electronically then you will be affected.

If you utilize a clearinghouse to submit your claims then the clearinghouse should be at the very least testing for 5010 compliance. You should be receiving notices from them stating that they are testing, or that they’ve completed testing. If you do not recall getting any notifications you should be looking on their website for 5010 information or contacting them if you cannot find anything.

Waiting to see if the Implementation date of January 1st really takes effect is not a good idea. You are taking a big chance. The Implementation will happen whether they extend the deadline or not so you really should become compliant as soon as possible. Not being compliant may result in a serious disruption of cash flow.

Since January 1st falls on a Sunday the compliance date is actually December 30th for Medicare claims. Any Medicare claims received after 4:00 pm on Friday December 30th that are not Version 5010 will be rejected. Testing is required before claims can be submitted and that testing must be completed by this date. If you submit claims directly to Medicare then you will need to test with Medicare. If you use a clearinghouse, you need to make sure that your software is creating the electronic batches in the Version 5010 and that the clearinghouse has completed testing.

Knowledge is the key. You may not understand all of the details of the Version 5010 and the changes, but you need to know how it affects you. Is your practice management system compliant? Is your clearinghouse compliant? A little research goes a long way. Don’t wait to look into this. There isn’t much time remaining.

What to do When a Claim Doesn’t Get Paid

Occasionally we get that response on a claim that was filed electronically even when we get the acceptance report from the clearinghouse. It’s not common but it does happen. Even though we received acknowledgment that the claim was received the best thing to do is resubmit. We verify to make sure all info is accurate such as name spelling, ID#, date of birth, and sex of the patient. If the claim is denied for timely filing, we appeal with our initial acknowledgment.

But then there are the paper claims – claims for workers comp injuries or no fault (auto) cases or personal injury accidents and even some obscure insurance carriers. Claims are filed on paper and no acknowledgment is received. You wait for payment or some explanation of what they are doing with the claim, but none comes. You try to call but getting someone on the phone is impossible. They aren’t like the larger insurance carriers with automated systems or better yet online claim look-up tools. At best you get a voice mail but if your experiences are anything like ours the messages go unanswered.

So what are our options? Keep submitting the claims into a black abyss costing more time and postage? Continue leaving messages on voice mail that appear to not be manned? Unfortunately there is no magic trick to handling this problem but we have come up with a system that helps to resolve some of these evasive claims.

We’ve developed a form that we use when we have a claim that we’ve submitted twice, haven’t gotten a response and can’t reach anyone by phone. It’s a very simple form. We use our letterhead with our address, phone and fax numbers. We write a brief note at the top stating that attached is a claim or claims that we have previously submitted at least twice with no response from the insurance carrier. Would they please let us know the status of this claim.

We then write in on lines we have labeled the current date, the provider’s name, the dates of service. We then have three check boxes for the insurance carrier to respond with the appropriate response labeled paid with a place for date paid and check number, denied and reason for denial, and not on file. Next we leave a line for the date we are submitting our request. We then leave three check boxes for the insurance carrier to check the appropriate response. We then request this form be faxed back to 315-865-6359 and the person requesting the information signs the form.

We have been amazed at how well this has been working for us. Some insurance carriers mail them back and some fax back and some ignore them too but we are getting responses to most and they come back quickly.

We often suggest to medical billing services that are looking for new clients that they use a current topic of interest to a medical office in their marketing efforts. The 5010 implementation which will go into effect January 1, 2012 is another great example of an excellent opportunity to market to medical offices. It’s hard to believe that everyone hasn’t heard about 5010 and looked into what it means in their office, but last week our computer guy was taking care of a terrible virus that had attacked and crippled our server and mentioned to us that he has many clients who are medical doctors who are totally unaware of 5010 which involves the electronic exchange of insurance information between the billing software and the insurance carriers. What it boils down to is many doctors are totally unaware if there software is current and will be able to submit their claims any longer after January 1. Without 5010 capable software, their payment for any claims submitted electronically will come to a screeching halt.

This would be a great time for marketers to contact medical providers offering to come in and explain how 5010 will likely affect their offices. We need to learn to take advantage of opportunities that situations like the 5010 implementation involve. The fact that many offices are not prepared for this change and may not have compliant software will be a huge problem.

If I were marketing now to medical practices, I would send a well designed sales letter offering to come into the office to see if they are up to date. You could offer to bring in lunch for the office staff to make it more tempting to the doctor. I would include with the letter a post card that says something like “Save this information in case your claims stopped getting paid in January! We can help!” If the provider doesn’t take you up on your offer to come in and talk to them about the changes the 5010 implementation will bring they may save the post card just in case. Come January and their claims stop getting paid they may look for that post card and call you frantically.

One of our providers had a claim that had been paid (correctly) back in June reprocessed by Medicare in September where they denied one of the services that had been previously paid. They took the money back from the provider on the same eob that they had reprocessed the claim. The denial only said “non covered charges”. I called Medicare and as soon as I gave the girl all the info so she could pull up the claim she immediately said “I have to transfer you to a Tier 2 Representative”.

Strange…..All I had asked was for an explanation of the denial. Told her I didn’t understand it.

So the Tier 2 representative comes on and pulls up the claim and says [QUOTE] “Oh, that’s an RAC audited claim, they are randomly auditing claims and reprocessing them for no apparent reason. You are going to have to request a redetermination because that denial makes absolutely no sense.”

Seriously?? I have to request a redetermination because Medicare decided to randomly audit, reprocess and deny a claim for no apparent reason and with no explainable reason??

OK…so now I could go off into a long political rant about how the government has just found another way to ‘cut costs’. I mean seriously, consider this:
• It took me a little research to even figure out what they did
• I had to dig back and find the original eob,
• figure out that the claim was reprocessed without any action on my end,
• there were multiple services on the claim so I had to sift thru to find the denied one,
• Read the denial codes to determine that it really didn’t make sense
• Make a phone call to ask
• Find the redetermination request form on their website (the correct one since I was doing an overpayment redetermination, not a regular redetermination
• Complete the redetermination request form
• Attach proof to support my claim (proof that I’m not crazy but they are!)
• Mail it
• Wait to watch for reprocessing


How many providers will never even know they had money taken away?? How many providers have staff that will go thru this trouble?? And how much did they have to pay their staff (hourly wage for time involved in taking care of this)?? More than Medicare actually took back? In some cases yes. So actually Medicare will make quite a bit of money on these RAC Audits!

I’m now stepping down off my soap box and getting back to work. 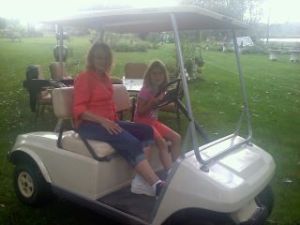 Summer’s over. Here in upstate NY we had a nice hot summer. Michele’s three girls (15,13, & 6 years old) came to work with her often and spent the summer riding around our large lawn on a newly acquired golf cart. We tried to convince them to learn to help with the medical billing but they only wanted to ride the golf cart.

The two older girls, Mackenzie and Mackayla, dominated the cart and Rebecca rode. Late in August when the two older ones had lost the thrill of driving the cart and were staying home more often, I convinced Rebecca to try driving. She had experienced a couple close calls with her older sisters and was afraid to try but it didn’t take long before she was begging everyone to take a ride with her. She’s been driving her mother and me to our upper office whenever we need to run up there every since.

Don’t forget – this sale is through next Friday. Place your order now.